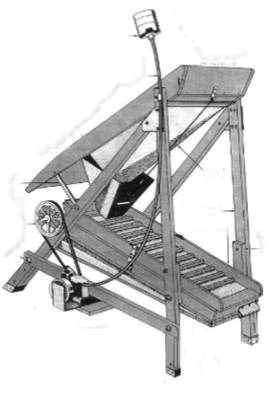 ATTENTION, all you gold diggers! If you are one of the thousands who dream of finding fabulous riches by panning for gold, chances are you're more than mildly interested in the new family sport of finding the glittering crumbs overlooked by the old-timers.

The fun of panning for gold becomes twice as exciting (and profitable) when you can work regions which are not swarming with other "claim jumpers." In his search for gold, the old-time prospector stuck pretty much to streams and riverbeds and passed up desert places because of a lack of water. The same holds true in the present day gold rush. Work through old diggings or find a promising spot.

With this build-it-yourself drywasher, the modern-day prospector and his vacationing family are able to work offstream diggin's and old mine dumps with as little as a tub of water, since only the screened concentrate needs to be washed.
The drywasher is nothing more than a motorized sifter which jiggles vigorously to separate the gold from the Paydirt you shovel into it. Built of mostly wood, anyone with a saw and hammer can build it, BUT the secret is in the plans.

Contents all plans in PDF:

Gold is at all times high! Some amateur prospectors have made thousands in a single weekend. You too can now join in on this lucrative hobby with these plans.